She never answered. I have learned not to take this personally. Maybe one or two. This does not make McCoy a lousy co-worker. Nearly everyone I spoke to—from a school dishwasher to the county superintendent—mentioned that she has a way of making people feel part of something. Frances Hickman, the cafeteria manager at Cabell-Midland High School, has served under four different food-service directors in her year career.


She grew up in Lincoln County, a rural area at the edge of the southern coalfields, the poorest region in a very poor state. Her family, like many others, had a garden where they grew much of what ended up on the kitchen table. And the tastes of those homegrown meals left a mark. She told me that it took years before she could bring herself to eat a canned green bean from the supermarket.

She wanted the students in her district to have a real relationship with food. In , the West Virginia Board of Education had imposed tough new rules that required meals to include fresh fruits and vegetables, lean meats, whole grains, low-fat milk and water. McCoy, a registered dietician with 25 years of experience, pushed her district even further.

One of the first things she did was remove the saltshakers from cafeteria tables—a move that prompted students to steal salt packets from fast-food restaurants and create a black market for them at lunch. At a time when 94 percent of U. McCoy was a proponent of fresh food. But she recognized that kids had to like what they were eating—and that she had to be able to pay for it. A friendly competition developed over who could come up with the best adaptation. The snap peas with mint, a quintessentially English combination, lost the mint; the garlicky greens became a lot less garlicky; the cinnamon in the chili was eighty-sixed.

That McCoy let the cooks decide what tasted good made them feel important and helped win them over to the new, more labor-intensive way of doing things. At every level, practicality took precedence over idealism: Where Oliver had been skeptical of government handouts on principle, McCoy happily accepted 2, cases of raw chicken from the USDA, because it left her more money to spend on fresh fruits and vegetables.

Where Oliver had insisted the cooks peel and slice 50 pounds of carrots, she ordered pre-sliced frozen coins that were ready to cook. McCoy also holed up in her office writing federal and state grants for money to buy equipment. Before the cooks had one, making enormous quantities of chili, taco meat or spaghetti sauce was backbreaking work. For each batch, cooks had to use several big stock pots. The process took hours, the pots were heavy to lift and it was awkward to transfer the finished sauce into containers.

A slosh or two inevitably ended up on the floor. But kids really like chili and tacos and spaghetti, which meant that cooks spent too much time making red sauce. At many U. Over the course of one morning, I watched two cooks quarter red potatoes and toss them in olive oil with a shake of garlic powder and paprika, then move on to rubbing chicken breasts with a spice seasoning. I saw cooks top rounds of pizza dough with homemade tomato sauce and cheese and mix olive oil and vinegar for salad dressing.

Commercial dressings, packed with sodium and calories, undermine the health benefits of most salads. The only items not regularly made from scratch are the ones for breakfast. Some, like the heat-and-eat whole-wheat sausage biscuits, looked fine. Others, including the sausage-stuffed pancake on a stick, could have made a school lunch Most Wanted list.

When McCoy saw me inspect one, she blushed and opened her mouth to explain, but ultimately said nothing. But the chicken and roasted potatoes at lunch were pretty good. Were it not for the red plastic tray, I would not have even known this was school lunch, so tight are my associations with metallic-tasting green beans, bland pizza and desiccated crinkle fries. I was impressed.


Not so much. But the students have apparently gotten used to it. McCoy has also gotten kids to accept better food by buying seasonal produce from enterprising student farmers. The first crop of local peppers she purchased from a student arrived covered with dirt, not clean and shiny like the ones from a mega-distributor.

But she understood that kids are more likely to try something if a friend had a hand in growing it. It was just another way for her to build a healthier food culture in a place that had been colonized by the drive-thru.


McCoy has since helped several students win grants to buy seeds and equipment. Counterintuitively, it is the huge number of students served about 10, a day that makes the numbers work. The more kids who eat, the easier it is to achieve economies of scale. CEP lets schools feed everyone for free. But the trick is that schools are only reimbursed for the number of meals actually served. So if the kids don't eat all of the meals that are prepared, the county has to bank the losses. McCoy needed her conservative, cash-strapped board to accept that risk.

Her pitch to the board was a meticulous demonstration of how CEP could work. Each year, beginning in , she added a few schools and watched what happened. The school went from serving or so meals a day to nearly 1, Because of successes like this, she earned the board's trust and was the first food-service director ever to be invited to join the superintendent's cabinet and the weekly meetings where big decisions were made. Oliver, for his part, has moved on from school lunch.

Oliver has since focused his attention and his television time on railing against the ubiquity of sugar and raising awareness of so-called Blue Zones , areas of the globe where healthy diets help a surprising number of residents live to or more. Still, he told me that he is proud of all that he accomplished in Huntington. The success that McCoy has achieved in Cabell County is rare, and was due to a propitious confluence of factors.

Not every district has such a supportive superintendent, for instance, or such an overwhelming determination to prove a reality TV star wrong. Much of what made the Huntington experiment work is transferable to other places—so long as they have someone like McCoy. Schools need an ambitious leader at the helm, one who understands both nutrition and how to manage complex operations.

In the mids, I visited two schools in the Boston suburbs that were minutes away from each other, but belonged to different districts.

In the one run by a motivated dietician, the food was colorful, fresh and reasonably tasty. In the other, administered by a disinterested box-ticker, the food was appalling: stuff like chicken nuggets packed with fillers, gray hamburger patties, bagel dogs. Bottom line: If you read the relevant news articles as they pop up on similar issues, Poppendieck won't deliver you any epiphanies, but she'll certainly flesh out your understanding of the complicated world of school cafeterias.

This is a good book, but crazy dense and not a quick read. I learned a lot about the history of school food and the competing concerns in delivering it. I was happy to see that she covered all the reasons I wouldn't eat in the cafeterias a student, and still won't as an adult who works in the public school system.

I know my district likes to say that it makes good, yummy food, but it simply isn't true.

She is careful to say that these are things she thinks will work, but that she doesn't have all the answers. It does clearly become a question of which values you support, though. Feb 23, Margaret Sankey rated it liked it. Whatever Jamie Oliver says, better school lunches are not simply a matter of districts being willfully ignorant, or Americans just being addicted to tator tots and nachos.

Free for All by Janet Poppendieck - Paperback - University of California Press

Poppendieck picks apart the myriad and overlapping restrictions, reimbursement, regulations and legal constraints on school lunches, not to mention the economics of allowing soda machines for sponsorship, farm subsidies, the low status of "lunch ladies" in school budgets and the resulting deskilling, peanut allergy complicatio Whatever Jamie Oliver says, better school lunches are not simply a matter of districts being willfully ignorant, or Americans just being addicted to tator tots and nachos.

Poppendieck picks apart the myriad and overlapping restrictions, reimbursement, regulations and legal constraints on school lunches, not to mention the economics of allowing soda machines for sponsorship, farm subsidies, the low status of "lunch ladies" in school budgets and the resulting deskilling, peanut allergy complications, the design of "multipurpose rooms" many kids cite the miserable, loud lunchroom as a reason not to eat , stigmas of reduced-price lunches and the almost mind-boggling charge of the cashier to keep track of what gets reimbursed as what and under what program.

Sep 12, Lo La rated it it was amazing. There's so much good info about why school lunches are the way they are. Its well written. I liked her vision of what the National School School Lunch Program should be and why and she makes a compelling argument for it. She even estimates how much her proposed program might cost and puts that cost into perspective, which not every writer would have bothered to do.

I only wish she would've proposed some solutions for where that budget could come from. 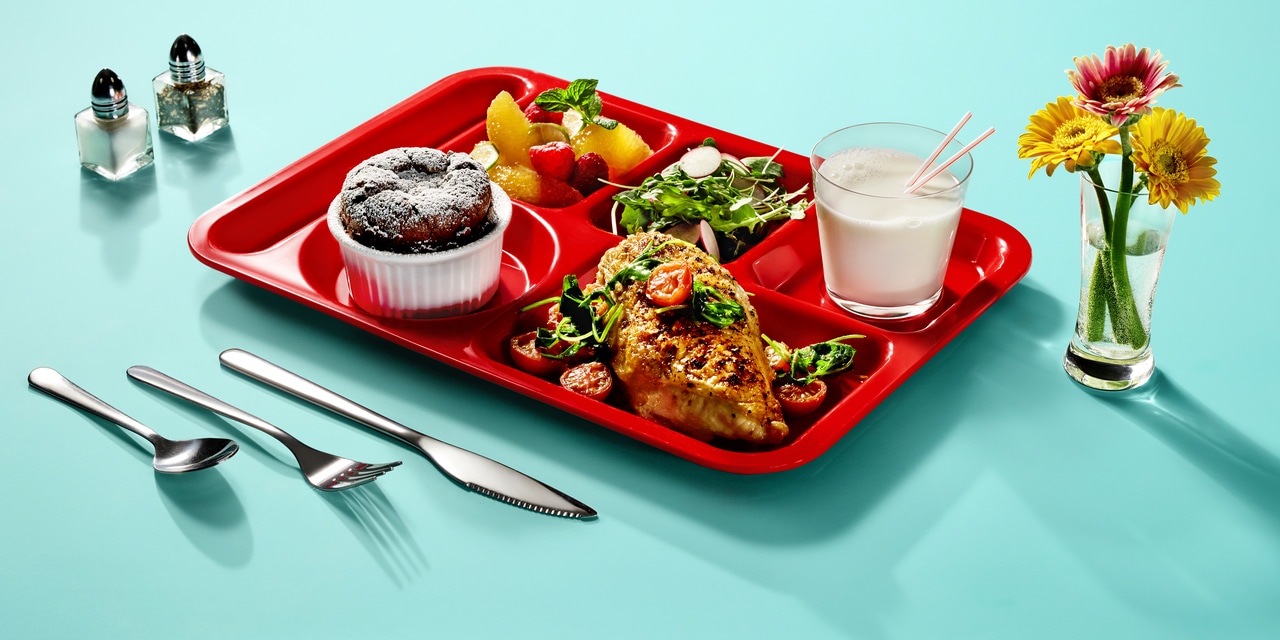 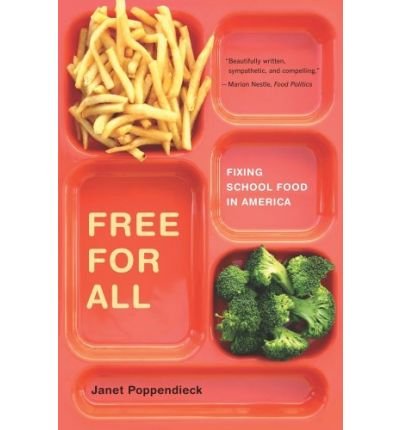 Related Free for All: Fixing School Food in America (California Studies in Food and Culture)